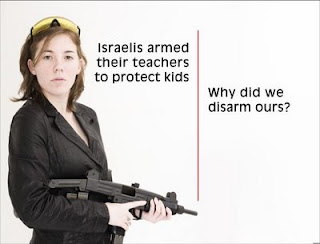 I'm guessing they won't have any suicidal crazies showing up to make some kind of insane point in Harrold, Texas. They will look for a place with less risk of someone shooting back. I'm also guessing that if the news media played these atrocities down, there would be less incentive  for the perpetrators to follow through with their delusions of grandeur.

""We don't have money for a security guard, but this is a better solution," Superintendent David Thweatt said. "A shooter could take out a guard or officer with a visible, holstered weapon, but our teachers have master's degrees, are older and have had extensive training. And their guns are hidden. We can protect our children."
In the awful aftermath of last week's Connecticut elementary school shooting, lawmakers in a growing number of states - including Oklahoma, Missouri, Minnesota, South Dakota and Oregon - have said they will consider laws allowing teachers and school administrators to carry firearms at school."
Posted by MuddyValley at 12:35 PM No comments:

The elk are still here 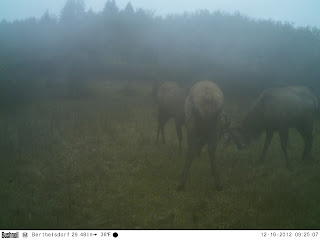 I set up a camera to see if I could catch the beaver re-building the dam that I tore out. He had built it on the overflow of my second dam and it had raised the water level so high it was failing. These guys were on the way up the hill after having knocked down a portion of fence causing another "cow leak" into the North field.
So far no beavers, but the elk were on all three cameras. This one was set up to make a video recording.
I do have a tag, but we still have meat in the freezer, and somehow I don't feel the need to get up early and enjoy the cold, damp weather and all the work it would entail. Chasing cattle and mending fences will still have to be done. One less elk won't make a difference.
Posted by MuddyValley at 8:39 PM 2 comments: 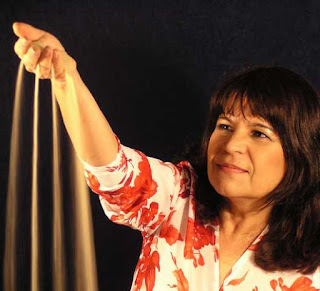 This lady does incredible things! a unique and minimalist ambidextrous art form that is destroyed as it is being created.
Well worth a watch!

Posted by MuddyValley at 11:05 AM No comments:

geese in the north pond 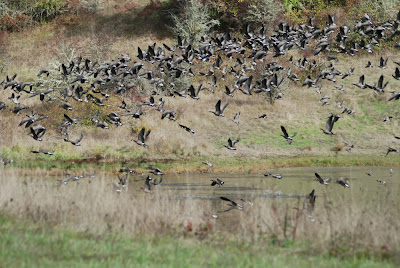 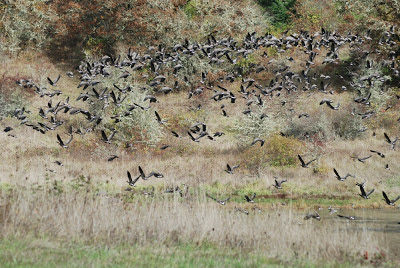 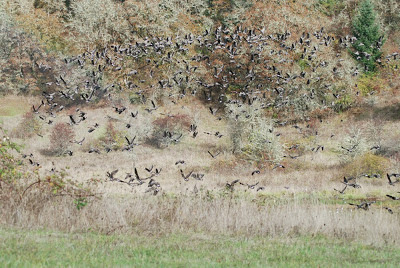 This was a couple of weeks ago 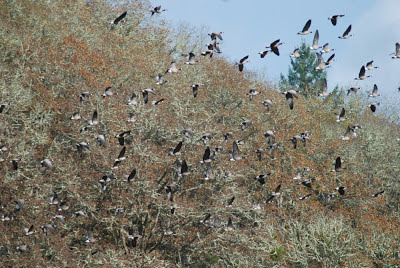 They are gone now

Posted by MuddyValley at 8:50 PM No comments:

Email ThisBlogThis!Share to TwitterShare to FacebookShare to Pinterest
Labels: geese 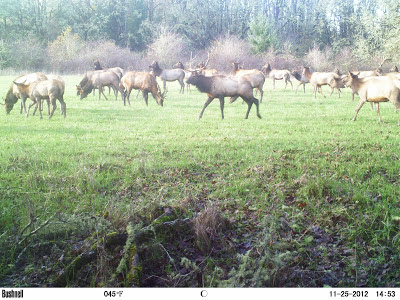 Elk by the north dam 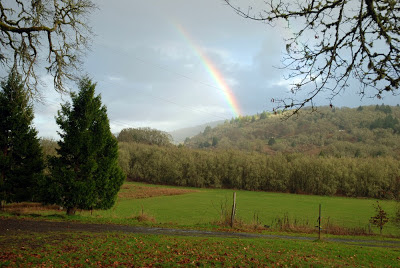 From the front porch 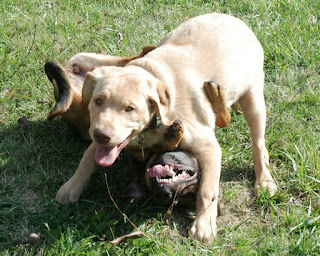 Daisy as a pup (on the bottom) 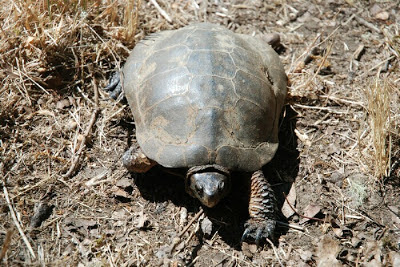 Western pond turtle who found his way into my basement 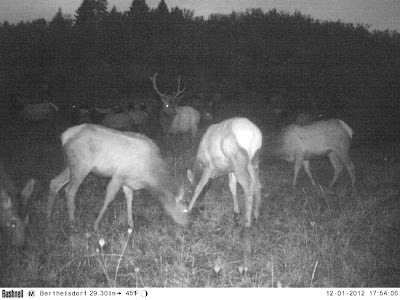 Elk by the center dam 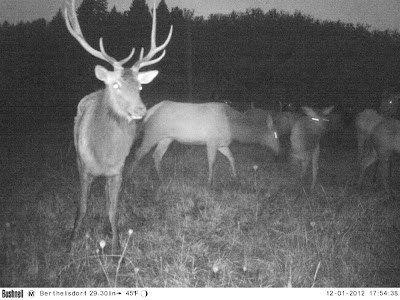 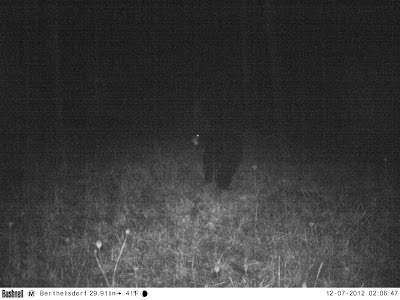 a bear looking around 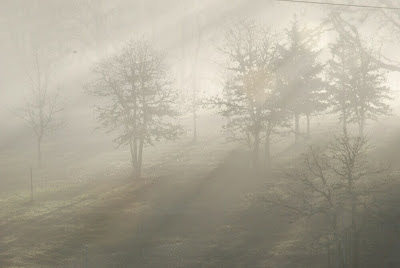 I'm not sure what a comerical is, I think they mean  commercials.
I guess I will never see the millions of $$'s I was planning to make when I developed and patented my device for cutting the volume when a commercial started up in the midst of a TV show.
It's about time!!!!!!!!!!
Posted by MuddyValley at 12:54 PM No comments:

One of my winter projects!
A while back I bought a large piece of parchment calf skin to replace the head on my old banjo. I acquired the banjo back in the early 60's. I had "picked" up a cheap one first, and then my banjo teacher suggested I try this one , which really did sound a 100% better. As I had little or no money, I was forced to ask my father for the grand sum of $100.00 to purchase it. He was not impressed, even after I played them both to show him the difference. As the banjo was not on any of his classical tapes or records, it was a miracle he came through.  I told him I had already bought it & now had to pay for it and as he didn't want any barefoot, shotgun toting banjo sellers knocking at the door, he coughed up the money.
Anyway, to get back on the subject, after reading the instructions that came with the head, and watching videos on U-tube, I decided to give it a try. The old head war torn almost all the way around. It was synthetic, and I decided to replace it with a natural calf skin head.
The first thing I noticed on disassembling it, was that there were more parts than in any of the instructions I looked at. 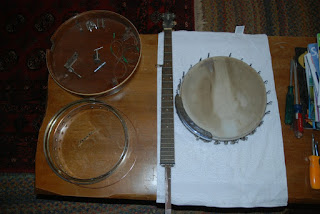 The bracket hooks and the wrist rest still haven't been removed, something I had to do to get them out of the way when attaching the new head. 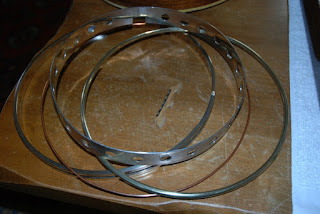 Lots of round pieces. 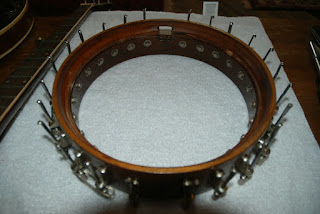 The wood rim about ready 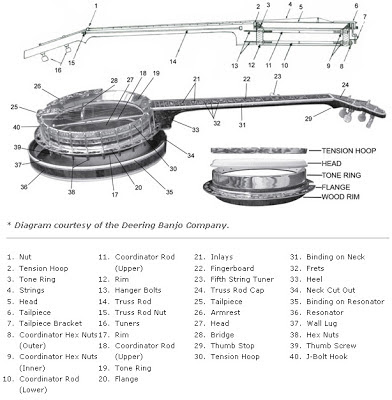 I referred to the above. It was not much help.So I dry fitted some parts. 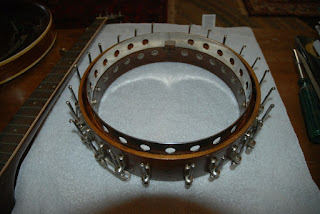 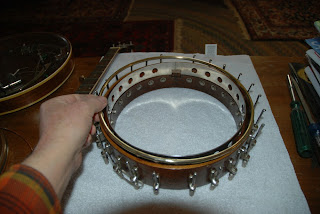 Another brass tone ring? This one rests on the top edge of the rim, not in it. Research tells me that is was an early way of making a tone ring. 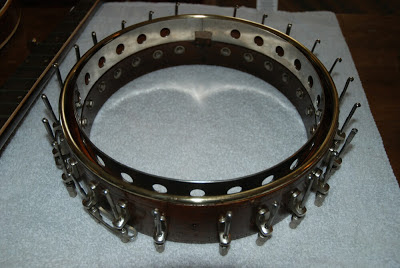 Like this!
I think this is called a high head type of banjo. 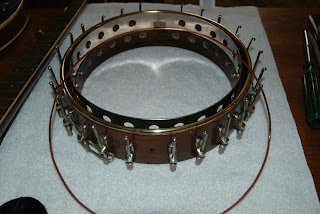 The flesh hoop. This is a wire ring that the skin wraps around the banjo rim. I had to make this as the plastic head that was on the banjo didn't use one. I used a piece of copper wire and beveled and soldered the ends into a hoop.. Brass would have been nicer as the copper will probably turn green, but I didn't have any brass and didn't want to use a coat hanger which the instructions suggested. The head wraps around it and is then pushed down by the tension hoop. 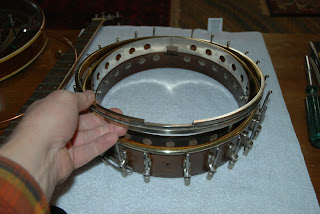 This is the tension hoop. It is pulled down by all the bracket hooks to tighten the head. The notch actually goes on the other end where the neck attaches. 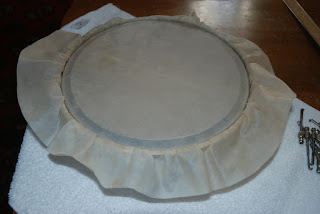 The skin is soaked for about fifteen minutes, laid on the rim over the tone rings, the flesh hoop is next placed on the skin. The skin is then folded up over the hoop and the tension hoop is set on top. 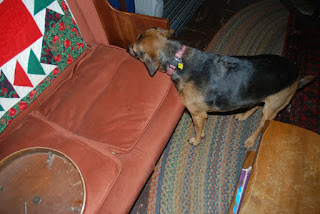 Daisy was interested in this part, as it smelled a lot like the hide dog-chew she buried under the couch cushion last year. She prefers her antler sheds and I guess is saving the chew for hard times. Every now and then when she thinks I'm not looking she checks to make sure it's still there. 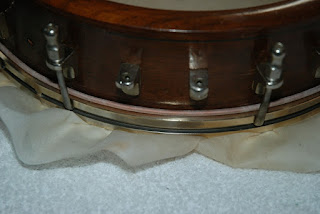 A few bracket hooks are attached to start pulling the hoop down. The outer folds of the skin are pulled by hand to remove all the wrinkles, then the rest are attached at the same tension.

Skipping a "head", as I didn't take as many photos as I should have if this were to really be a "how to put a head on a banjo" post. Especially since no beer was involved. 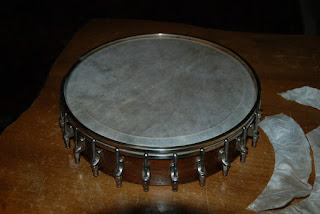 After drying all night and tightening all the clamps, the head was removed, the excess trimmed off, and it was all re-assembled. All the instructions I found say to trim the excess skin in place. I couldn't see how to do that neatly, so I took the head off. It was nicely wrapped around the  flesh wire and I used a pair of scissors to trim it enough so that the cut edge wouldn't show above the tension hoop. It worked very well, was easy, and went right back together. It looks like there will be plenty of room between the tension hoop and the neck to tighten more if needed. 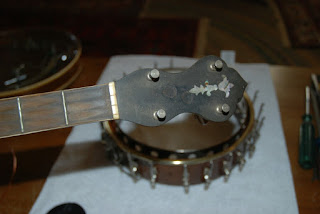 Somebody had had a set of Scruggs pegs on it at one time & then filled the holes. Maybe some day I'll clean that up. 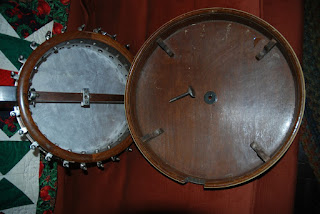 All ready for the strings!  Something I forgot to order when I bought the head. It seems the local music store is no more and I'll have to either drive to Newberg or Salem to get them. I need a new bridge as well, the old one is slightly warped from sitting on the broken head for so long.
Then I need to do a lot of practicing as it';s been a while.
I have no idea who made this banjo as there are no serial numbers of names anywhere on it. If anybody can help me with this it would be appreciated.