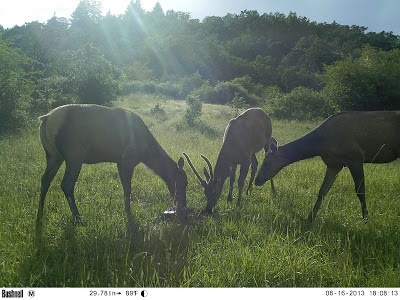 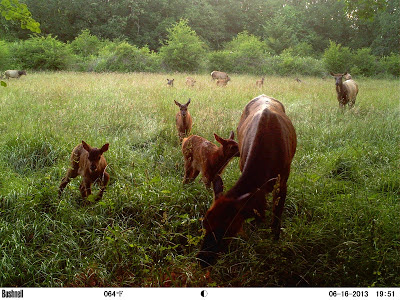 The babysitter cow, her calf & a couple of others by the North dam.
The grass is pretty high & will be mowed & baled fairy soon. (If the rain stays away.)

At least one of these elk does not like to be photographed. She started out unplugging the battery wire from the camera. Then she decided to just bite it off when somebody must have told her that unplugging it would just engage the backup batteries in the camera and that leaving it plugged in and cutting the wire would shut it down and make me have to reprogram it when I set it up again.
There is nothing special about this location, other than it is by a short opening in a line of trees that they like to walk through into a more sheltered smaller field.
I thought I had them fooled this time. I screwed strips of bark over the battery accessory wire leading up to the camera lag bolted to the Oak tree. It didn't work. The bark was pulled off, the wire was chewed to pieces and I never found the ends meaning more money for Radio shack and time soldering those little tiny contacts on the plug. At least she unplugged it, so there were more pictures. I'll screw something heavier over the wire this time, and maybe place a salt block out there to give them something else to focus their attention on like on one of the other cameras. They also like to breath on the lens to fog it up for the next ten or fifteen shots until it clears up. 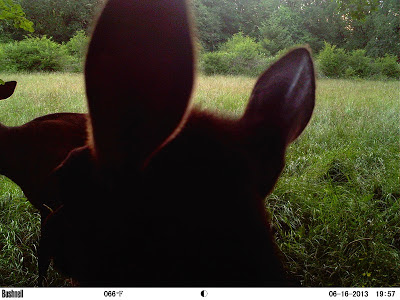 The culprit in the act!
My sister and her son were visiting from Canada and we all took a Jeep ride around the place. She had never seen the elk and we managed to drive right into the herd when we got to the top field. We seem to have everything they need here and they show up year round on the cameras or through personal sightings just about every week. Which probably means at least some of them are always here.
Now I will warm up a soldering iron and make up a new battery wire. I just keep the AA's in the cameras to hold the memory settings and use a 6v sealed battery for power as they still have at least six volts in them when I pull them for re-charge every year. (or when I have to make up a new wire). The AA's drain in a few weeks after several thousand photos. I have the cameras set for three shots and a delay of one second until the next shot if it senses movement. This makes for a lot of pictures, and my biggest problem is choosing which to keep and tossing the rest. I hate to delete them.